ClipSmartPro is a powerful professional Clipboard Manager and a unique productivity tool. Don't fiddle around with cumbersome and time-consuming file-transfers between different complicated programs. Instead, save time, money and resources with a program which combines and synergetically integrates a useful Clipboard Viewer, a powerful Clipboard Manager, a Rich Text Editor, a versatile Image Editor, a File Organizer, a Snippets Database for Text, Images, HTML Clips, Video Clips and Files, and much much more... 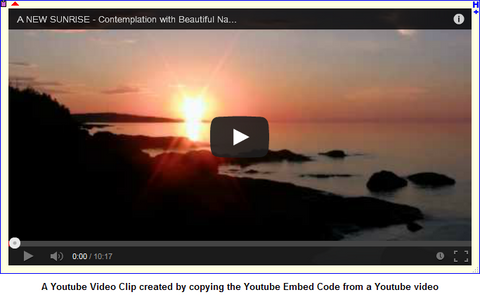 The Windows Clipboard is the most important channel for data exchange between different programs. ClipSmartPro optimizes this channel and makes it much more efficient by providing a powerful database of Text Clips, Image Clips and File Clips:
ClipSmartPro intelligently collects everything you copy to the clipboard.

The Windows clipboard is a black box - ClipSmartPro makes it transparent by providing an excellent Clipboard Viewer with the most advanced capabilities in the field of Clipboard Managers today:
ClipSmartPro brilliantly shows what's in the clipboard.

In many cases you will not need other programs for your daily work, as ClipSmartPro contains a powerful Rich Text Editor, a smart Image Editor and a flexible File Clips Organizer. So you save a lot of time and resources (we call this "insourcing" in contrast to "outsourcing"):
With ClipSmartPro you can professionally edit what you have copied to the clipboard.

ClipSmartPro is very easy to use and features an intuitive user interface:
You will love it!

KEY FEATURES & SCREENSHOTS Back to Top…

Click on one of the thumbnails, then on the larger image to show it in a zoom window. Hover the mouse pointer over a word with a dotted underline to show a definition for this word.

ClipSmartPro always shows the current content of the Windows clipboard in a separate window. This can be resized, always stay on top of other windows, can be made semi-transparent and can send the clip to a mail recipient or to a file.

Copy text from a text processor like MS Word or OpenOffice Writer to create pure Text Clips or Rich Text Clips: All text formattings and even images inside the text are preserved. Then e.g. create a collection of often used text snippets.

Create Image Clips by copying an image selection from a graphics program. Or by rightclicking an image in your web browser. Or create a screenshot of a window with Alt-Print. Then organize your collection of Image Clips in custom Permanent folders. 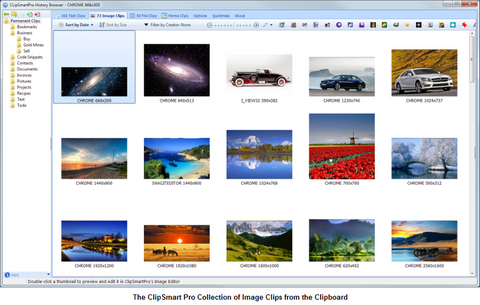 In ClipSmartPro, copying a Youtube embed code instantly creates a special Video Clip. So you can collect your preferred videos, organize them in ClipSmartPro inside permanent folders and watch them whenever you want.

In ClipSmartPro, copying a selection from a webpage additionally creates a special Web/HTML Clip which preserves the HTML formatting. So you can build your own web page by combining HTML clips from different sources. 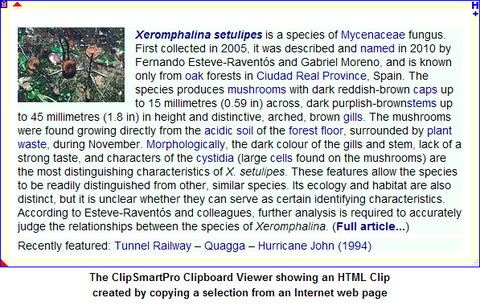 A list of every text, web page fragment, URL, video clip, image and file which has ever been copied to the Windows clipboard. This list can be restricted to a custom number of clips, sorted, searched, filtered, grouped etc.

ClipSmartPro contains a powerful Rich Text Editor to directly edit a Text Clip with professional text formatting features and images. Then you can export Text Clips as Text, Rich Text and HTML. Text Clips can be transformed with custom Scripts. 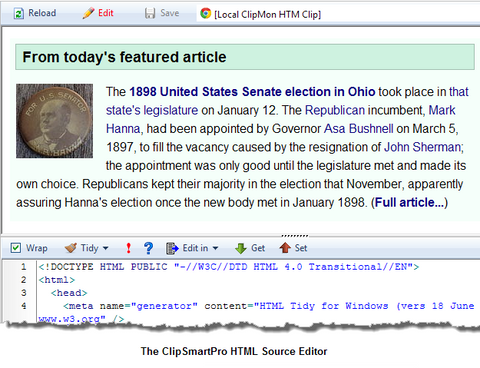 ClipSmartPro contains a smart and versatile Image Editor. You can crop, resize, edit colors, add a shadow and round corners and much more. You can also send the image to an external graphics editor and have the changes automatically propagate back.

ClipSmartPro contains a snippets database where you can store and organize your often needed Clips in a custom folder structure: Text, images, files, videos, web-clips, etc. An amazing productivity feature, only one click away. 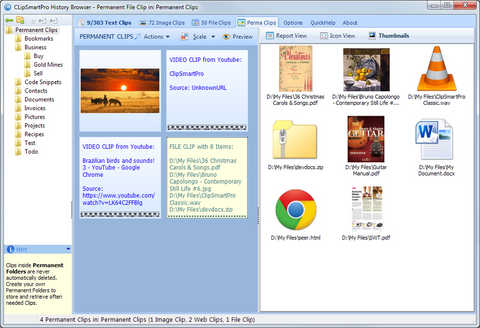 With a global keyboard shortcut, bring up a popup menu containing the last 10 Text Clips and "auto-magically" insert them in every program you are currently working in. You've never inserted text-snippets so fast - it's fun!

BENEFITS Back to Top…

SUPPORT Back to Top…

How to report a problem or a bug:

Reproducible bugs will be fixed in the shortest possible time!
Please follow these steps when you report a problem:

The download will be available in the next days.
Subscribe to the PA-Soft Newsletter to be notified when it is available.

BUY Back to Top…

The purchase link will be available in the next days.
Subscribe to the PA-Soft Newsletter to be notified when it is available

FAQ Back to Top…

I am a novice computer user; is ClipSmartPro complicated to use?
ClipSmartPro is fully automatic; just select anything in any application; then press Ctrl-C to copy it to the clipboard; then open the ClipSmartPro History Browser to edit it; then paste it into any other application with Ctrl-V. But ClipSmartPro can do MUCH more: press the F1 key to open the comprehensible Online Help for ClipSmartPro.
We want to use ClipSmartPro on all computers in our company. How many licenses do we need to buy?
You need to buy a License for the number of computers where ClipSmartPro is installed; follow the "BUY" link and select the number of License seats you want to purchase; there are considerable quantity discounts; you will get one single License Key which is valid for the exact number of purchased License seats.
Where can I configure the ClipSmartPro Clipboard Viewer to suit my needs?
RIGHT-CLICK on the yellow ClipSmartPro Clipboard Viewer window to show the CLipSmartPro context menu, where you can customize various settings.
Why are there two programs in ClipSmartPro?
ClipSmartPro contains a Clipboard Viewer which shows you the current content of the clipboard and the History Browser where you can view, paste and edit the previous clipboard items.
The Clipboard Viewer is always in my way; can't I minimize or hide it?
The purpose of The Clipboard Viewer is to always show you the current clipboard content. But you can reduce its size with the grip on the bottom right corner and place it e.g. in the corner of your screen or on a second monitor; or make it (partially) transparent with the "T" key; or make it stay behind other windows with the F9 key.
I am concerned about the security of the data I copy to the clipboard
ClipSmartPro does NOT compromise the security of the data you copy to the clipboard! On the contrary, it saves you from losing important data by collecting them in comprehensible lists. Moreover, you can erase the current clipboard content with the Delete key (which is not possible without ClipSmartPro); or you can delete the whole list of Clips at the end of the day with one command if you want.
I don't have a Credit Card or a PayPal account. How can I pay for the License?
Follow the "BUY" link above. You can pay either with your Credit Card or Paypal or by Fax or by Phone or by wire transfer etc. Or even after getting an invoice (if you are an official organization).
I am a computer nerd; how can I get more details about the clipboard content?
Show basic information about the current clipboard content by clicking on the yellow ClipSmartPro window and then pressing the "I" key on your keyboard; or get even more details with Ctrl-I

SCRIPTING Back to Top…

The following applies to programmers and advanced users who want to extend the functionality of ClipSmartPro to manipulate ClipSmartPro clips in different ways. For example, you could create a script to display a ClipSmartPro Image-Clip to the partecipants of a video conference, or to dial the phone number contained in a Text-Clip, etc.

ClipSmartPro has a simple Scripting interface. This means that users can write their own scripts to manipulate ClipSmartPro clips. (See the example scripts for Text-Clips delivered with ClipSmartPro: Speak, MS Word Spellcheck, Encrypt, Decrypt, Open in Notepad/Wordpad, etc.).

Right now, the Scripting functionality is limited to Text-Clips (compiled exe-scripts, batch-scripts (.bat) and VisualBasic-Scripts (.vbs) in ClipSmartPro History Browser). In future versions of ClipSmartPro Scripting support will be extended to other clip types. Users can send their own scripts (only source-code) or script ideas to PA-Soft to have them published on this website (including the source-code).

To work properly in ClipSmartPro, Scripts must follow these guidelines:

Download the archive with the source-code of the script examples (you can use these as starting point for your own scripts):

VERSION HISTORY Back to Top…

Hover your mouse pointer over text with dotted underline to display an explaining image.

New: Powerful Grouping and Filtering in the Text-Clips list

New: Toggle the Stay-On-Top mode of the Clipboard Viewer with the F9 key

New: A sub-menu has been added which allows you to select a custom feedback sound